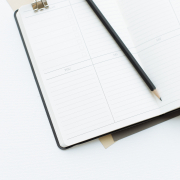 Thanks to Traci Smith for sharing this Great Idea in her Treasure Box Tuesday.

Smith writes, “As you’re in the thick of things right now, open up a document on your computer (or a note) and take 30 minutes to write down what’s going well, where the candles are stashed, where you put the pageant costumes, etc. Also put down good ideas that you passed on or didn’t have space for that you might consider next year. For extra bonus points, put a link to that document in your calendar around September 2023! Your future self will thank you.”

This, by itself, is a fantastic idea – I highly recommend pausing and doing it right now!

I suggest writing these up in different emails and scheduling them to be sent to yourself (or write up the gratitudes right now and send them out!) when they will benefit you the most. Or a text, voicemail or other auto-send that will catch you when you need – and when you aren’t expecting a reminder from yourself of something you may have otherwise forgotten.