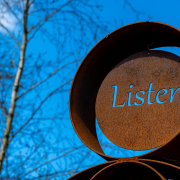 Some day I hope to come up with a cool hashtag and a link and a social media blitz about this one, but for now, I think the in-person approach is what’s really needed. This is my own ‘Great Idea’, though it hardly seems novel or great – it’s pretty basic.

It’s Charlie Brown basic, actually: I want to set up a booth a la Lucy, that says, ‘The Listener Is In’, and charge people a nickel (actually, nothing) to listen to their stories. I want to put this booth in the park down by our high school, where my spouse and all of his colleagues are doing an amazing job of holding a few hundred teen-agers together (for the most part).

These kids are unraveling fast, though: the fear, aka, terror, of the past two years is piling up. Anyone with knowledge of social/emotional awareness saw these latest shootings coming from a mile away – it was only a matter of where and when.

All of us need a place to belong; a people to whom we belong. I want to create that for my local high schoolers by listening. That’s all it takes, often: someone to listen while the other pours out their thoughts, fears, hopes, dreams, wants, needs, anxieties, and despair. I won’t be able to fix a single one of those things, or help anyone achieve the goals they share, or even take the next step.

I am not a spiritual director or social worker or licensed therapist, nor will I present as such. I am simply a Listener.

I have no idea what effect, if any, it will have, but it may offer someone a sense of being heard. It may offer a few people an idea that – even if they don’t avail themselves of my ear – there was someone in the park who was willing to hear. I have no grandiose idea that it will catch on, but if anyone wants to join me in being a Listener, it may be the simplest offering we can give to our community: someone who took the time to hear another’s story, tend it with love, and hold it.

I’ll be in the park starting next week – every Wednesday and Thursday after school for the remainder of the school year, which here is until just about the end of June. Not a huge commitment. Not enough time to establish a pattern. But maybe someone will sit and tell me what’s bothering them, and in lightening that one burden, maybe I can help the world be a tiny bit better.

UPDATE: (06.27.22) – After only three weeks in the park, I can report one visit with a student per park visit. I think that’s pretty good! I simply sat at a picnic table with a little sign that said, “Here to Listen” and at least one student per day stopped to talk. They usually started by asking why I was there or what I was doing. Once I asked them to tell me something about their day or how school was going, the conversation rolled.

This would be a GREAT way to start the school year!! Stop by the local, off-campus park – somewhere where students won’t feel trapped or insecure, but where many of them walk to get a bus, catch their parental ride, or head home on foot. Every school has this zone. A simple sign will let them know you’re there. Your clerical collar (for those ordained) may or may not enhance the invitation – you know your community. Sit and listen and support your local students and school!!

Turns out Episcopal priest Rev. Adrian Dannhauser has not only done a version of this, but wrote a book about it. Read her witty, poignant stories in Ask Me for a Blessing (You Know You Need One) (Broadleaf). Yea!